Spanish unemployment continued its upward march in January 2008, according to the latest set of figures from the employment office INEM. The total number of unemployed was up by 132,378 in comparison with December. This was an annual increase of 8.62% over January 2007 to put things in perspective. 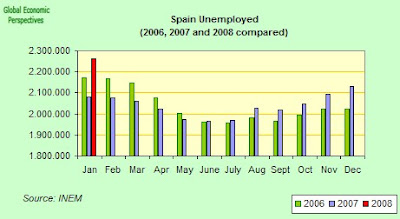 If you look at the inter-annual comparisons, it is clear that this is now a sharp increase. Really at this point I don't mind sticking my neck out, Spain is entering recession (negative Q-o-Q growth) in Q1 2008 for the first time since 1992. Now lets wait and see where we go from here.

Just for good measure here are the y-o-y changes in unemployment for 2007. The line of evolution is clear, it's a long swing, and not simply a by product of the financial turmoil of last August. So we have entered, but I have no idea at all when we will exit. 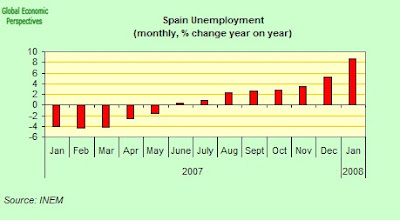