German retail sales appear to have contracted again in January, according to the latest reading on the the Bloomberg purchasing managers index.

European retail sales fell for a fourth month in January as rising fuel, utility and food prices left shoppers with less money to spend, the Bloomberg purchasing managers index showed. The gauge of sales in the euro region was a seasonally adjusted 48.1, compared with 46 in December. A reading below 50 indicates a decline. The index is based on a survey of more than 1,000 executives compiled for Bloomberg News by NTC Economics Ltd.


In Germany, Europe's largest economy, the index also showed a decline, registering 44.2 after giving a reading of 44 in December. 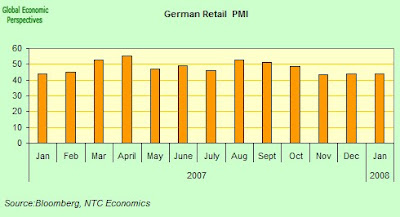 Italian sales dropped to 43 from 44.7, the biggest monthly decline since the survey began four years ago.In France, on the other hand, the index rose to 56.2 from 49.1. What this actually means in practice remains to be seen. Italy already seems to be in recesion at a good first aproximation guess, and Germany appears to be on the threshold. What is not clear is where exactly France is in the process at this part of time. On the surface she appears to be showing more resilience, but the proof of the pudding will most definitely be in the eating thereof.
Posted by Edward Hugh at 10:17 PM