Well, this really is a shocker. Spains services sector had a significant contraction in January according to the latest PMI. This makes it very probable that the Spanish economy is entering recession (negative growth) in Q1 2008. I would like to see a bit more data before reaching a final conclusion (the next industrial output release should settle it) and I will try and justify this view when I do my monthly report at that stage. 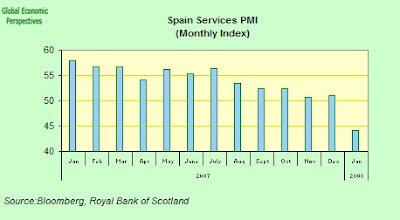 The Spanish services sector purchasing managers' index (PMI) stood at 44.2 in January, down from 51.0 in December, according to market research group NTC. A reading above 50 indicates the sector is generally expanding, while a reading below 50 suggests general contraction. The PMI value is the lowest since the series began nine years ago. January's service PMI slowdown was much sharper than expected, Nathan Carroll at NTC Economics noted. 'While employment growth continued, service sector companies could be expected to reduce their workforce in the next few months to cut costs,' he said.