German industrial output rebounded in December and increased at the fastest rate since August in December, led by durable consumer goods such as washing machines and flat-screen televisions.

According to data relased by the Economy Ministry in Berlin earlier today, output increased by a seasonally adjusted 0.8 percentin December from November, when it declined a revised 0.3 percent. 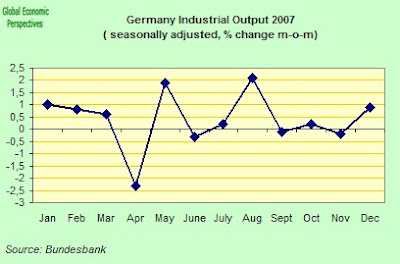 Today's report suggests some parts of German industry are weathering the euro's 11 percent gain against the dollar over the past year rather better than might have been expected, although today's exports numbers put a question mark over the strength of this process going forward.Overall, production of consumer goods rose 2.3 percent in December from November, the ministry said, with durable goods up 3.5 percent and output of non-durable goods increasing 2.1 percent. Investment goods production dropped 2 percent. 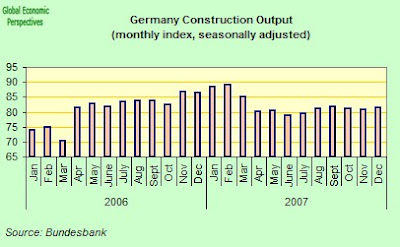 German exports fell for a second month in December, and manufacturing orders dropped the most in five months, led by a drop in export sales, the ministry said yesterday, giving us another sign that Europe's largest economy is losing momentum.

Orders, adjusted for seasonal swings and inflation, fell 1.7 percent from November, when they rose 3 percent. This report, when combined with the November and December trade data suggests manufacturers are starting to feel the pinch of a surge in the euro that's making their exports less competitive abroad just as the U.S. economy hovers near recession. Chancellor Angela Merkel's government cut its 2008 growth forecast last month, citing a stronger euro and the increase in oil prices.
Posted by Edward Hugh at 10:15 PM