Just a couple of fresh pieces of data, which simply confirm the general picture we have been getting. Firstly unemployment, which continues to rise. We now have the December data from INEM. The chart below gives a monthly comparison of 2006 and 2007. As can be seen, 2007 was a better year than 2006 until June, when the labour market turned, and since that time the unemployment tredn is decidedly up. 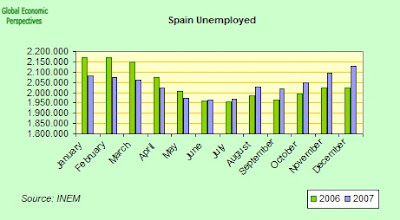 Looking now at the latest construction output data released by Eurostat this week, we can see that, despite some volatility the trend is definitely down on a year on year basis - dropping in November by 6.2% when compared with November 2006. 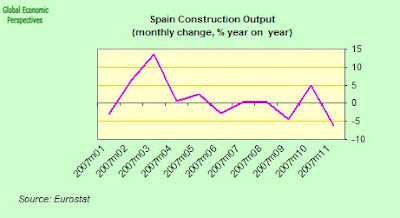 The month by month chart reveals a similar picture, since the months with positive growth have been followed by stronger downward movements. We should also bear in mind that actual construction follows new sales only with a lag, as what has previously been bought still needs to be built. Plus we should anticipate a strong increase in civil engineering activity as the government tries to some extent to offset the impact of the fall in private residential activity, and especially prior to March's elections. 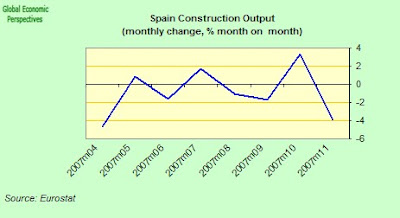 Perhaps the clearest indication of the presence and extent of the economic slowdown is offered by the December data for the EU Commission Eurozone Economic Sentiment Index.

As reported earlier in the month the Commission’s economic sentiment indicator for the entire eurozone is now on a clear downward path. At 104.7 in December, down from 104.8 in November, the index was at its lowest since March 2006. 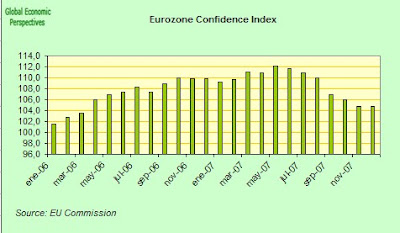 But perhaps more important than the steady downward drift in the general indicator are the individual country differences, and in particular the sudden movement in Spain and Ireland since the summer. 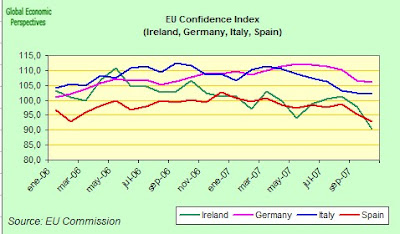