German consumer confidence held near a two-year low in January as inflation and lack of real earnings leverage continued to reduce households' spending power. The GfK AG's forward looking index for February, based on a survey of about 2,000 people, was unchanged from January's reading of 4.5, the market- research company said in a statement today. The index was at 4.4 in December. The Nuremberg-based GfK were at pains to point out that they conducted this month's survey before world equity markets plunged on Jan. 21. 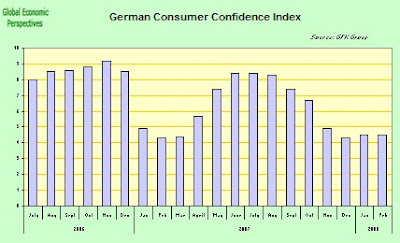 The sub-indicator measuring willingness to spend rose to minus 8.8 from minus 10.7 and households are more optimistic about the economic outlook, with a gauge rising to 28.7 from 23.6. But perhaps most importantly, the measure of consumers' income expectations fell to minus 4.7 from minus 1.7. 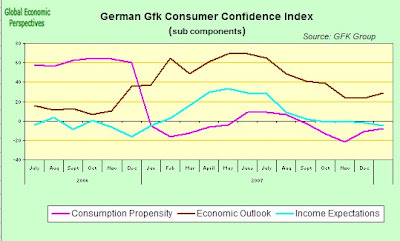 For income expectations to ``stabilize, it is essential that some calm returns to price developments,'' GfK said in its statement. German inflation accelerated last year to 2.3 percent, the fastest pace since harmonized euro-region records began in 1996, driven by a higher sales tax and rising energy prices, while consumer-price inflation slowed to 3.1 percent in December from 3.3 percent in November. 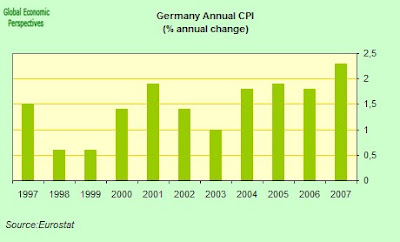 Meanwhile German business confidence unexpectedly rose slightly in January from a two-year low. The Munich-based Ifo research institute said its business- climate index, based on a survey of 7,000 executives, increased to 103.4 from 103 in December. Some newspapers seem to be making rather a lot out of this, but if you look at the chart the change is, as I say, a slight one, and compared to early 2007 we are still at very low levels. So I think it is more a case of putting a brave face on things. 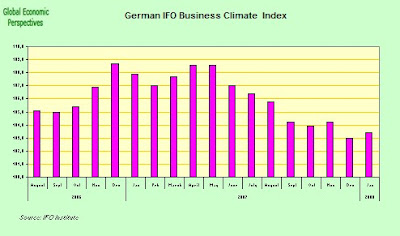