According to a first provisional estimate of the Federal Statistical Office (Destatis), the consumer price index for Germany is expected to rise by 2.7% in January 2008 over January 2007 (December 2007: +2.8%). Compared with the preceding month, the rate of change will be –0.3%.

The estimate is not based on the results of six Länder, as would be usual, but rather has been arrived at on a limited data basis with more forecasting was applied than usual. Consequently, the result here involves larger uncertainties. The reason is that the regular changeover of the consumer price index from base year 2000 to the new base year 2005 has not been completed yet.


The year-on-year rate of change of the harmonised consumer price index for Germany, which is calculated for European purposes, is estimated at +3.0% for January 2008. In December 2007, the rate of change was +3.1%. Compared with the previous month, the index will be down by 0.3% in January 2008. 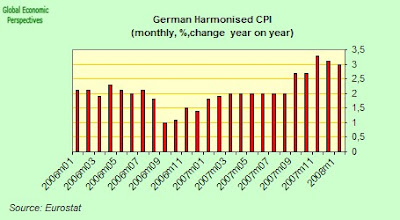