Consumer confidence in France dropped to a record low in January as accelerating inflation squeezed purchasing power. A gauge of consumer sentiment fell to minus 34, the lowest since the index was introduced in 1987, from a revised minus 30 in December, Insee, the Paris-based national statistics office, said today. 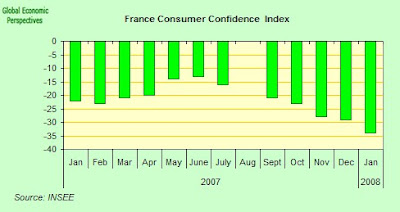 A gauge of people's personal financial situation slipped to minus 25 from minus 23, the Insee report showed. A sub-index evaluating the outlook for standards of living plunged to minus 44 from minus 32.

A 68 percent increase in oil prices the past 12 months has pushed France's inflation rate to the highest in almost four years. President Nicolas Sarkozy's popularity dropped to the lowest since he took office in May as higher prices deepened concern he'll fail to fulfill his pledge to boost living standards, two opinion polls showed this month.

French consumer prices rose at an annual rate of 2.8 percent in December, up from 2.6 percent in November, Insee said Jan. 15. Crude oil reached a record $100.09 a barrel in New York this month and is now trading about $90. 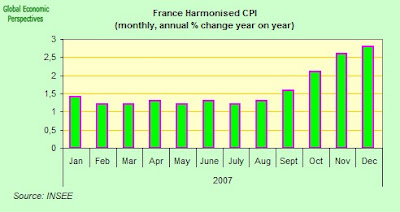