Hanging In The Balance Over At The ECB

In the time of my confession, in the hour of my deepest need
When the pool of tears beneath my feet flood every newborn seed
There's a dyin' voice within me reaching out somewhere,
.............

It's not often that I await the ECB after-meeting press conference statements of Jean Claude Trichet with such an intense feeling of anxiety and bated breath. But this time, as the song goes, it will be different. This time there are plenty of reasons to think that, having been the first off the mark in looking for the exit, Europe's monetary leaders may sound a note of caution at tomorrow's meeting, and indeed indicate there may well be solid grounds for at least taking a time out, if not engaging in a longer process of pausing for extended thought. My advice: if you don't actually have any pressing need to hit the eject button, then don't do it.

In the first place we have the latest batch of Eurozone PMI data, which suggest that the process of economic recovery is going to be neither so rapid, nor so straight forward, as was initially thought. And even more to the point, exit from the recession is being more characterised for its unevenness than it is for its uniformity. Growth in February was heavily weighted to the manufacturing rather than the services sector, and in manufacturing there was more dynamic in demand from the ex-Eurozone export area, than from internal orders, suggesting that the 6% drop in the Euro is having a positive impact on external competitiveness, while domestic demand remains weak and lacklustre. In the second place, in addition to the generally weaker condition of the services sector, there are pronounced general weaknesses in some countries: Spain, Greece and Ireland are obvious cases (and Greek manufacturing even managed to lose ground in export markets in February), but output and activity in Portugal and Italy also look quite fragile at this point. 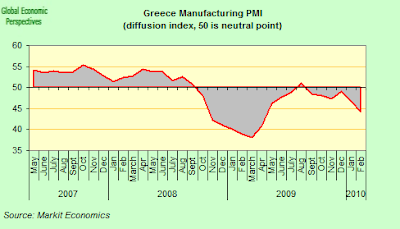 In Italy the phasing out of the car scrappage scheme had a strongly negative impact on February sales in the Italian retail sector, with the PMI dropping sharply from 54.4 in January to 44.5, and after three succesive months of increase sales now seem to be solidly back in contraction mode. Even more worryingly, firms operating outside of the autos sector also noted in their responses to the survey that weak consumer sentiment had been a key theme in February. 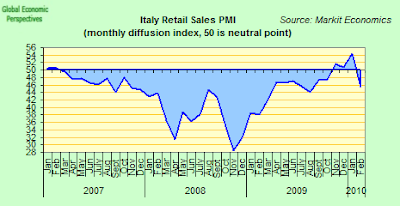 “The PMI has portrayed a steadier recovery of the Eurozone economy over the past year than the more volatile official GDP data, and suggests that upward momentum has been sustained so far in the first quarter of 2010. The data are consistent with GDP rising by around 0.4% in Q1. However, not only has the divergence widened between the surging manufacturing and struggling service sectors, but national trends continue to worry. Robust growth in France and Germany contrasts with a deepening downturn in Spain. These divergences raise concerns about the sustainability of the recovery, as well as posing difficult questions for policy-makers.”

Slow but solid as the growth in the EuroArea has been, the performance has hardly been spectacular, and we are a long, long way from a "V" shaped rebound. In addition, outside of France there has been little evidence of any sort of solid, home-grown, domestic consumption growth, and the general picture is one of overall fragility, with the continuing danger of relapse back into quarterly contraction.

All of which offers us the background for a fairly extended series of headaches for policymakers over at the ECB. Indeed members of the Governing Council may well be having a hard time of it deciding what their next move should be. Having moved policy steadily up to the door marked "crisis exit this way", they may well be having second thoughts about whether this is exactly the right time to cross the threshold. Indeed as Ralph Atkins noted on the FT Money Supply blog, the European Central Bank has gone strangely quiet.

Since the beginning of December ECB board members have collectively made fewer speeches than in any three month period since the global financial crisis erupted in mid-2007. According to the ECB website list, since the start of the year Jean Claude Trichet has made only one full-scale address - in Sydney earlier this month - and even then his remarks were overshadowed by his decision to return early to join eurozone leaders in talks on the Greek crisis. In the first two months of last year, Mr Trichet gave at least nine speeches.

So why the comparative silence? The ECB is not normally reticent in coming forward to guide market expectations. Could the communication pause reflect growing uncertainty among board members about what to do next?

With Greece and other countries in Southern Europe having so many problems returning to growth no one is very clear anymore what the ECB exit strategy is actually going to be. And obviously, if you aren't clear about something then maybe it is better not to talk about it.

And the ever vigilant markets are noticing the change in stance.

Previously, the European Central Bank was seen as delaying an increase in interest rates out of concern for some of Europe's weaker economies. But with the German economy now in a stall, and Italy's possibly back in recession, expectations for ECB rate increases have been driven further and further back, and financial markets are not now expecting the first increase in the ECB’s main policy rate until September next year. The recent announcement that Eurozone annual inflation slipped from 1 per cent in January to just 0.9 per cent in February - undershooting to an even greater extent the ECB’s goal of a rate “below but close” to 2 per cent - have only reinforced their view. If there is little inflation danger, and the recovery is week, then what is the point in raising rates?

In addition, the prospect of sizeable fiscal tightening in many EMU countries will also act as a disinflationary force in these countries in coming months, pressuring the euro downwards and keeping up the pressure on the ECB to stay on hold until at least next year. Aggressive fiscal tightening by Greece, Spain and Portugal looks likely to plunge all these economies back into even deeper recessions. All else being equal, this calls for a looser monetary policy, as does the need to at least keep the euro where it is, and stimulate export activity to destinations outside the monetary union.

The ECB stopped providing 12-month liquidity in December, and Thursday’s governing council meeting is in theory going to consider toughening the terms of what is planned to be a final six-month liquidity offer, as well as scaling-back the three-month and one-month liquidity offers. The bank will also have to give serious consideration to how to cope with the expiry on July 1 of its first 12- month liquidity offer, which saw €442bn pumped into the system a year earlier – the largest amount ever in a single ECB operation.

And Spain's banks don't stop drinking at the fountain. According to the latest data from the bank of Spain, the dependence of Spanish banks on ECB finance hit a new high in January - following the "last" one year offer in December - with €88.6 billion outstanding in longer term financing operations. To date they have only made use of some €77.3 billion of this (see chart below), but they have a further €10.5 billion parked on deposit at the ECB, ready to use as needed. 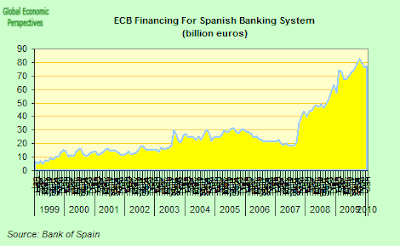 Despite the apparent success of the recent EU delegation to Athens in achieving further cuts from the Greek administration, doubts remain about how 6 minus 2 can sum down to five, or, if you will, how growth and fiscal austerity can come together. And in particular how Greek (or Spanish, or Irish) banks, who in theory will no longer have access to the extensive liquidity provision whose benefits they have been so enjoying of late, will be able to cope. Between public and private sector financing needs, Spain will have to fund borrowing (including rollovers) to the tune of something like 50% of GDP this year.

So, as Ralph Atkins puts it, despite the apparent success of the EU Commission in obtaining agreement on a further €4.8 billion package of austerity measures Greece is still far from receiving the all-clear. Ironically, market concerns will in all probability now shift to worries that Athens has gone too far in slashing budgets and raising taxes, and that the fiscal measures announced will simply act as a massive brake on economic activity. The risk is that Greece is now in a vicious circle in which fiscal austerity sends the country ever deeper into recession - and Athens has to react even more aggressively to bring down the public sector deficit as a share of GDP.

There will be no easy-to-find Aristotelean mean here I'm afraid. So how will they play it? As I say, at 2:30 tomorrow afternoon I will be all ears, with my eyes totally glued to that ECB webcast.