I hadn't seen an advance release of the January German export data, when I wrote the following on Tuesday, honest injun I hadn't:

Well, this is only a hypothesis. But if the hypothesis has any validity we should be able to make some predictions on the basis of it. I would make two. Firstly, since East Europe’s economies are often dependent for their growth on exports to the West, and in particular to Germany, then we should be able to see some “shadow” of this German process cast out into the East.

In the second place, we should see the process continue to some extent in Q1 2010. That is, based on what we have seen so far, in Q1 imports should rise, as industrial output in the early parts of the supply chain surges, and net trade should as a consequence be less positive than in Q4 2009. On the other hand, all the imported components awaiting processing should make inventories rise. So that’s a prediction. Now we need to wait and see how good it is.

I think I oulined in the post itself just how much you could see the impact of the long Eastward shadow cast by the German economy in the industrial output performance in Central Europe, but little did I expect, when I wrote those words that further confirmation of the hypothesis would come within a mere 24 hours: 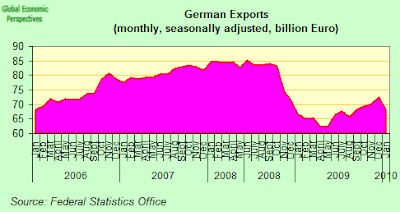 So we are seeing the imports rising effect, which suggests, since domestic consumption is falling at this point, that those inventories are starting to rise again, given that the expected follow through on exports is nothing like as dynamic as most analysts are suggesting. Oh, I know, I know, we have been having some very bad weather of late...

Axel Weber is forecasting a slight negative performance of the German economy in the first quarter, but in fact things are still not so clear since, as I wrote on Tuesday:

"Given everything I have said above about swings in imports and inventories, I would say German GDP will be very near to stationary again this quarter, with a possible slight upside depending on the inventory swing, but whatever upside we do see will more than likely disappear as quickly as it came when we get to the Q2 2010 data."

In other words, it is all down to inventories again, and these are very difficult to foresee. Nonetheless I would make two more points:

Firstly, the Bundesbank’s forecast for growth of 1.6 percent in 2010 is looking rather optimistic at this point, even though GDP was at a very low level last year, so in theory getting some growth should not be that hard.

And secondly, that German recessionary "double dip" that I mentioned back in November does not look so implausible at all at this point. All that is needed is a very slight downward revision to the Q4 2009 data, and Axel Weber's own prediction for very slight negative growth in this quarter to be confirmed, and there we will be, back in recession. Which would only leave us with the French economy - among the EU majors - showing any sign of a robust recovery.

Of course the implications of all this rather technical argumentation are fairly profound. In the first place, as I noted in this post, any talk of the ECB raising interest rates either this year, or in the first half of 2011, would seem to be way, way too premature. And secondly, it is becoming increasingly obvious that Europe's (theoretically) stronger economies are inexorably yoked together with all those supposedly weaker ones, via the Eurozone (and EU27) current account imbalances. 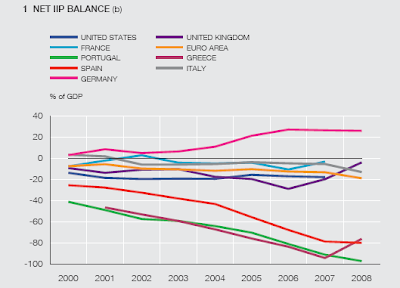 So solving one problem also implies solving the other. Never has the case for a "united we stand, divided we fall" approach been clearer. So gentlemen, please, let's get a note of reality back into all those deliberations about what to do with the problems being faced in countries like Latvia, Hungary, Greece and Spain. We need common solutions to common problems, and we need solutions that work.
Posted by Edward Hugh at 8:56 AM