Some Random Thoughts On The Deflation Problem

Today it is precisely one month since yours truly first reported that he was starting to feel swamped. Well he still is, but even though your author is still struggling to meet the quantitative demands of neo-classical graduate economics (especially, the statistical vintage) he still thinks that now might be as good a time as ever to jump back into the saddle and practice some economic punditry. After all, this is something he, much unlike graduate econ math, is quite familiar with.Needless to say, it is difficult to know where to start but since I am only now returning from an extended pause it might a good idea to pick up one of the themes I laid out just before the anvil of quantitative science hit me. Consequently, one thing that I have been persistently noting in my ongoing analysis of the global economy has been the risk of deflation in key economies due to the dramatic decline in domestic demand and credit momentum.

Specifically, I have been warning that when it comes to the old economies of the world (measured by median age) the risk of a deflationary backdrop is particularly large. The argument here is really quite straight forward in terms of economic dynamics and basically hinges on the idea that relatively old economies do not have sufficiently dynamic internal demand conditions to prevent their economies from falling into deflation. Obviously, the risk of deflation can hardly be confined to these economies at this point and what we are facing now is a potential scenario of global deflation both in terms of core and headline prices as well as of course asset prices. At least I would say without sounding too doomist that this is now a real threat.

Deflation Coming to a CPI Near You?

A couple of months back I sketched my thoughts on the topic as I asked the simple question of whether deflation would be the next macro story. As the carnage in global finance continues and as the effect on the real economy is increasingly making itself felt I am sure most analysts and observers feel a bit shell shocked. I know that I do. Consider consequently the recent news that consumer prices in the US fell a whopping 1% on a monthly basis which more than suggests how the threat of deflation is mounting.

Of course, the monthly decline in consumer prices masks a healthy y-o-y growth rate of some 3.7% (2.2 in core prices) which does not exactly spell deflation in any sense of the word. However, the negative momentum must be considered here and in particular the fact that the global economy has gone from a situation of liquidity disruptions confined to the wholesale banking market, over to a severe credit crunch in terms of firms operational finance and on to what must now be considered a complete freeze of lending to all agents. On the back of the recent barage of execrable news from the US, JPMorgan rolls out the inevitable prediction that the Fed and Bernanke may even introduce some form of ZIRP to counter the recession.

And speaking of ZIRP we learned yesterday from Japan how exports sank the fastest pace in seven years which also prompted analysts from Barclays to suggest that Japan would return to deflation and that the BOJ would have to re-introduce ZIRP accordingly.

I don't know whether the good lads at Barclays had to dig deep to come up with this call; needless to say that deflation in Japan is now a foregone conclusion as we venture towards 2009 and the previous sharp dose of cost push inflation tapers off. At the BOJ, rates were kept at the odd 0.3% yesterday and while there may be an strong inclination not to cut rates to 0% for simple reasons of credibility I do think that they will have to bite the bullet as we move forward into this slump. In a general global context, I think it is important to recognise the massive negative shock we are seeing on demand conditions in those nations who have hitherto been living high on credit and since the credit channels are now firmly broken, so will those macroeconomic credit providers (read: exporters) also suffer .The epitomy of this must clearly be Japan but also Germany comes immediately to mind.

And now that I am talking about Europe, the deflation ghost is also here hovering like a dark shadow over the economic edifice. Of course, and as a hell of a lot more than the proverbial Rome is burning I am not sure what the ECB will do here? It is true that it seems that European policy are content with flexing their fiscal muscles while Trichet et al. remains in the ivory tower where the M3 presumably is still growing above target and where only a definitive drop in consumer prices below 2% would seem to allow the ECB, in a postmortem perspective, to really act along the lines of its other CB peers. At this point I will give the ECB the benefit of the doubt in the sense that we have indeed observed a real change of strategy, but given other CBs' response the ECB seems still, to be the odd man out.

That may change quickly though. The Spanish representation at the ECB roundtable certainly seems to be predicting a dire potential outcome which, given the state of things on the Iberian peninsula, it is difficult to second guess.

As in the US we are far from an actual state of deflation, but given my argument as I laid it out (see link above) the negative momentum we are observing suggests that what comes next on the macroeconomic front may be quite "unexpected" as those ever incoming stream of Bloomberg headlines are so fond of noting. If we look at the evolution of data the interpretation is quite clear. As can be seen from the graphs below, the decrease in inflation is currently being produced solely as a function of declining headline inflation (this is the same picture as the one emanating from the US and Japan). 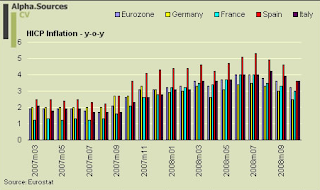 More generally, it is hard not to think back to the days when Trichet was playing tough on inflation, when CEE central banks revalued as there was no tomorrow, and where moral hazard (or traitor?) was pinned on all those who had the temerity (I positively love that word!) to argue that something had to be done. Clearly, we are past that now and to steal again the analogy conjured by my colleague Edward Hugh; what is the point in having your throat slit alongside your enemy's just to see who can run the fastest before bleeding out? Clearly, not the most productive of endeavors I would say. 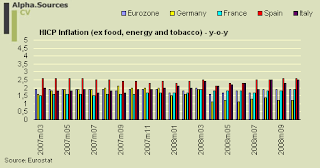 Meanwhile and returning to the graphs one last time it seems as if, once again, one of Macro Man's metaphors will be useful; more specifically I am talking about the one in which Trichet does the humpty dance (now, there is a party I would attend!). Do you see a hump sir? I do. 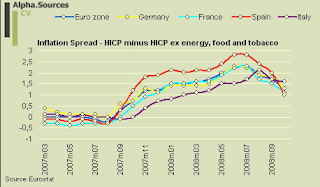 Obviously it is never so simple. First of all there is the good old sticky price phenomenon which is also present in the graphs where headline (cost-push) inflation is coming down rapidly but where core inflation naturally will need more time before adjusting to the economic fundamentals. In this way, and if we pull out the oldie but goldie dichotomy between the Anglo-Saxon and Continental European economies conventional wisdom would have it that prices (and wages) adjust more more slowly in the latter. In some ways this would merit the divergence between the Fed and the ECB in tackling this mess. However, I am not sure such MD/SAS analyses apply in this case. More specifically, what I am looking for in particular is what will happen in the transition as many economies now will need to depend more on external demand to achieve growth. Remember here that all those rescue packages need to be paid for and domestic demand in itself will hardly do it. For the US et al. a reduction of external imbalances will be of material importance.

Thus, I am also sure that we have the whole rebalancing/global imbalances discourse knocking around somewhere in the background. Yet, I am just not sure that the ECB can "help" the US by keeping interest rates up and by derivative "offering" the Eurozone as a shoulder on which the global economy can lean for demand. Add to this of course that the market has already discounted the incoming recession through the absolute slaughter of the EUR/USD. 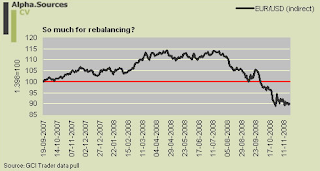 In this sense the ECB may get double pinched since if they lower rates further (and one has to assume that they will) it COULD take the Euro to a level where the objectives of policy would be in conflict in the sense that rates would have to be kept higher than otherwise to avoid the Euro to fall in the .9-.8 region. In some ways, this is would square well with the likely growth path of the "future" Eurozone as an economy driven less by domestic demand than has hitherto been the case. And yes, you heard me right, there will be much less domestic demand to go around in the Eurozone and indeed the entire EU 27 once the corrections in Spain and Eastern Europe becomes clear for everybody.

And thus we end up at one of my favorite hobby horses (I have several). In a world where governments are presiding over ageing populations and faced with a major overhang of debt in the context of fighting this behemoth of a financial crisis, the incentive to try to burn up the debt through inflation (and for all things in the world, to avoid deflation) and thus by derivative export your way out of trouble is massive. I would hold this to be true even without the particularity of the current situation in the sense that as the world ages so does the number of economies dependent on external demand grow. In fact, it is precisely this "incentive" to be export driven I think it is so crucial to pin down in both a practical and theoretical sense, but that will have to wait for another day.
Posted by Edward Hugh at 3:15 PM