``The worst is still to come for manufacturers,'' said Carsten Brzeski an economist at ING Group in Brussels. ``The industrialized world is heading for a recession and the German economy is in the middle of the storm.''

Industrial production in Germany declined the most in almost 14 years in September, meaning that a Q3 contraction (and hence a recession) in Europe's largest economy is now more or less a "done deal". Output was down a seasonally adjusted 3.6 percent from August, according to data from the German Economy Ministry in Berlin earlier today (Friday). Year on year earlier, production adjusted for working days fell 2.1 percent. 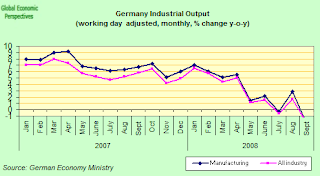 German companies are scaling back production as the global economy buckles under the weight of the credit crunch and the impact of higher borrowing costs, hurting export markets and causing consumers to cut back on spending as they worry about the outlook for their jobs.

The September drop in manufacturing was led by a 7.2 percent slump in the production of durable goods like washing machines, computers and televisions. 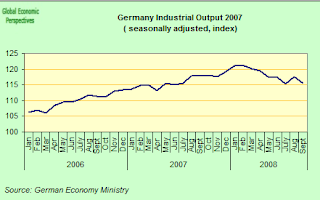 
And the output for the coming months doesn't look any brighter. Manufacturing orders dropped by a record in September, led by a sharp drop in foreign demand for factory machinery, with s easonally adjusted constant price orders falling 8 percent from August, when they rose 3.5 percent. This was the largest drop since records for a reunified Germany began in 1991.

German business confidence - as measured by the ILO institute index - fell to the lowest level in more than five years in October. 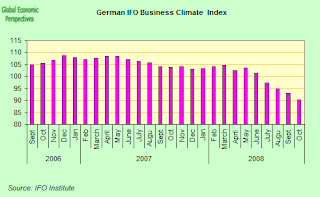 And the manufacturing PMI for Germany showed contraction at the fastest pace in seven years in October. 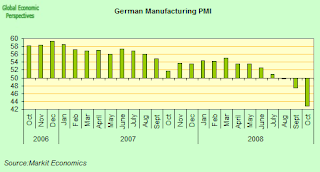 So the German economy seems to be well mired in recession just as the International Monetary Fund (IMF) warn that the majority of OECD economies face their first year of full contraction since World War Two in 2009.
Posted by Edward Hugh at 1:56 PM