The Eurozone's current problems are not mainly a result a of prolifigate and reckless spending of government resources in the Eurozone periphery [1]. Even nobel laureate Paul Krugman has begun to forcefully push this argument arguing that the real source of the malaise is the steady build up internal Eurozone imbalances. I only conditionally agree. As I have argued on several occasions, the key to understand the current situation in the Eurozone is to see the connection between the obvious inflection point reached in the context of the public debt/deficit and the need to correct through an internal devaluation (relative price deflation). The main point is then to recognize that the while the former is definitely a prerequisite for the latter, the process itself (deflation) will only serve to intensify the short term and long term pressure on public finances.

Moreover, the recent flurry in the context of interest rate swaps used by the Eurozone (and other) governments to generate current assets for future liabilites in an effort to massage public deficits only serves to add a further layer of confusion and uncertainty to the fiscal aspect of the situation. More generally, and ever since the inception of EMU the growth and stability pact (SGP) has been critisized for being an ineffective tool to police the need for fiscal soundness in the Eurozone member countries. The re-emerging discussion on on the use of interest rates swaps and other financial instruments by Eurozone member countries only further serves to emphasize this critique. Interestingly and despite the rather massive coverage, many financial market pundits have emphasized this as a non-event because the use of such techniques are not new [2]. I respectfully disagree that this is the main point here even if I agree that the there is no reason, in particular, to point the guns at Goldman Sachs [3] either.

In this way, I think this is in fact quite significant, and I am a bit surprised to see that no-one (bar my regular complice) seems to be getting the main drift here. This is consequently not a question of creative accounting by part of Eurozone debt management offices, but simply a question of drastically poor balance sheet management. Thus, one wonders where we would have been today if these people had actually studied the nature of assets and liabilities of the institutions (i.e. (macro)economies) they were employed to safeguard and how it is affected by things such as a population ageing and the demographic transition rather than studying more or less exotic financial instruments (click on picture for better viewing). 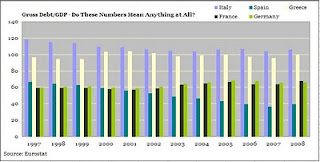 Oh well and before I turn completely Neanderthal on you I am obviously being unfair here. There is nothing wrong with an interest rate swap itself and anyone with even a basic economic intuition can see the clever and sound proposition offered by an interest rate swap in the context of debt issued in foreign currency while your liabilities, obviously, remain in domestic denomination. This would be good balance sheet management then.

What transforms it into poor debt management and essentially poor governance is when those same currency swaps are entered at an exchange rate which is unfavorable to the private market counterparty. The immediate effect is to create a lump sum transfer of funds to the issuer of the underlying debt (e.g. Greece). This is then used to bring down the running deficit or the public debt for the purpose of reducing interest rates. However, it also creates a future liability not recorded in the balance sheet. Felix Salmon provides the best no-nonsense explanation I have seen so far;

How might a deal like this work? Let’s say that Greece issues a bond for $10 billion, which it would then normally swap into euros at the prevailing interest rate, getting $10 billion worth of euros up front. In this case, it seems, the swap was tweaked so that Greece got $11 billion worth of euros up front — and, of course, has to pay just as many euros back when the bond matures. Essentially, it has borrowed $11 billion rather than $10 billion. But for the purposes of Greece’s official debt statistics, it has borrowed only $10 billion: the extra $1 billion is hidden in the swap.

So, why might this be a problem then? Well for a whole host of reasons, but I can think of one in particular.

Essentially, the future liabilities (and assets) of the state finances of Greece, Italy and all other sovereign states ultimately hinges on the demographic transition. At least, this is the case in developed economies where societal structure is largely built upon intergenerational contracts and various forms of pay-go pension and health systems. In this way, trading liabilities into the future for a short term cash flow concretely helps to undermine already eroded public finances. But it gets worse. It creates a mismatch on the balance sheet of the government which is effectively hidden from the market and other stakeholders. More worryingly is then the fact that while these swaps imply long term lump sum liabilities such liabilities can easily be discounted to the present and in the current context with bond vigilanted at large fixing their gaze on the Eurozone sovereigns, long term liabilites may soon turn into current ones if push comes to shove (i.e. this is then what the Titlos affair is all about). This naturally directly undermines whatever credibility the SGP had left, but it also effectively adds uncertainty to a situation which is already beyond difficult for the EU and the Eurozone to handle.

Now, at this point all this is obviously water under the bridge and what is really left now is to slowly but surely try to figure out the extent of the liabilities Eurozone governments have swept under the carpet. As noted, the maturity structure on such instruments mean that while they are not set to payment in the immediate future the implied future liability and its effect on the current stalwart attempts to breathe life back into these economies is likely to make all those neat recovery plans drafted so far worth next to nothing. I would hold this to be particularly true in light of the obvious fact that this is not only something done on the sovereign level, but also on lower levels of governance. It will be interesting indeed to see whether the bond vigilantes will draw the final gasp on this one.

At the end of the day the issue of interest rate swaps and other derivatives used by public entities to hide and mask debt is likely going to pass over quickly exactly because it is, as the current choir sings, not news. I understand this dynamic of the market discourse. However, this should not deter a simple macroeconomist from drawing out a longer line of thought.

In this way, I believe that if the Eurozone is going to have a credible future on the back of this mess, it must be equipped with institutions that adamantly establishes a much tighter fiscal coordination mechanism among its member economies. The flurry described above only serves to accentuate this furhter. The SGP should thus be relegated to the eternal dust bin of poor institutional setup where it deserves to be

The idea of a common monetary union was always flawed in a number of ways, but there is also a way forward. Yet, it requires I believe a much more transparent fiscal supranational body to complement the single monetary policy wielded in Frankfurt. Naturally, this will not solve any of the looming problems in the context of how to get and sustain growth faced with a demographic transition locked in towards very rapid ageing. However, it may provide a sound institutional setup on which to start building a future more solid economic edifice.

Many will recoil in horror from this blatant political and Eurofederalist argument. Let them recoil I say, but as an economist I see no other alternative. And that, contrary to blaming Goldman Sachs or emphasizing the fact that it is not news, is exactly the right lesson to draw from an obscure tale of obscure interest rate swaps.

[1] - Someone please look at the future liabilities of Germany!

[2] - See an original source here, this from FT Alphaville, as well as this which is the original academic piece detailing the issue in an Italian context.

[3] - Who has been under much scrutiny by part of the Eurozone finance ministers in the context of a particular swap arranged with Greece back in February 2009 under the notional name of Titlos PLC (all this is very wonkish!)