Slovenia Has a Better Quarter, But the Slump Continues

But before we get too excited about this fact, we need to consider that this escape from recession was simply a technical detail, and due to movement in the trade impact. Both exports and imports fell sharply - exports of goods and services by an annual 21.3 percent and imports of goods and services by 24.8 percent, so since exports decreased less than imports the external trade balance contributed +3.1 percentage points to GDP annual volume growth, or put another way, without the slump in imports the drop in GDP would have been even stronger. Of course, it sounds funny to say you come out of recession when living standards actually fall.

So exports, imports and investment are all still falling.

GDP Continues In A Slump

Slovenia’s economy sank deeper into a recession in the second quarter as a slump in industrial production, investment and construction continued. Gross domestic product contracted an annual 9.3 percent after shrinking 8.5 percent in the first three months. Slovenia, which the wealthiest nation among the Eastern Europe countries that joined the 27-nation bloc since 2004, is battling with its worst economic decline in almost two decades as demand waned for its exports, which make up two-thirds of total GDP. 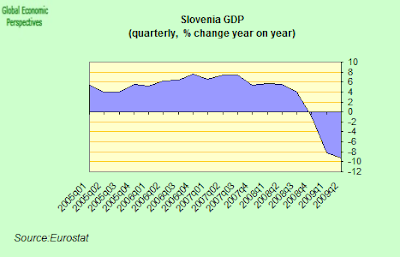 Underlying the drop in GDP is a sharp fall in manufacturing activity, which is the result of a large drop in exports. In fact industrial output shrank for the ninth consecutive month in June, plunging an annual 22.3 percent after a 19.8 percent drop in May. A decline in in output was seen in all industries. Mining and quarrying output fell 4%, while manufacturing output dropped 23.2%. Compared to May, industrial output fell 0.1%. In the first six months of the year, output declined 21.1% compared to the same period last year. 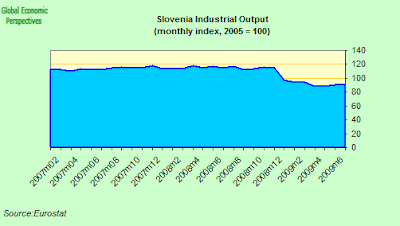 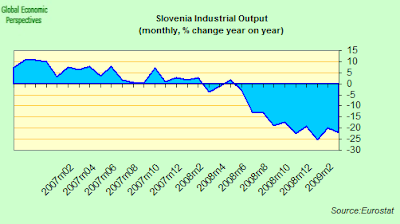 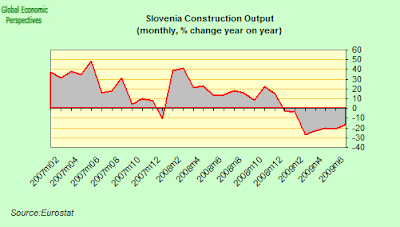 Retail sales rose slightly - by 1.2% - in July over June, but were down 10.6% over July 2008 according to national statistics office data. 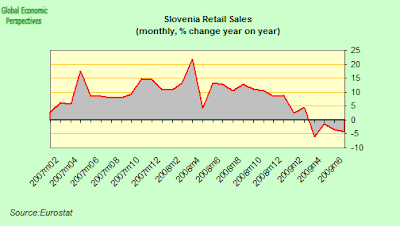 Unemployment has been rising steadily, but fell back slightly to 6% in July, from 6.1% in June according to seasonally adjusted Eurostat data. 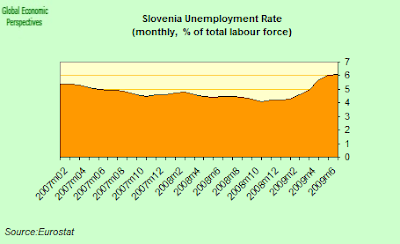 Producer prices, often seen as an early predictor of inflation, had their biggest annual drop on record in July on the back of falling demand both internally and externally. Prices of goods leaving factories and mines declined an annual 3 percent, falling for the fourth consecutive month, after a 2.4 percent decrease in June. Prices fell 0.2 percent month on month from June. Consumer-prices an annual basis according to the National Statistics Office methodology, in yet another sign that the country is likely to face an extended period of mild price deflation. Measured with the EU harmonised index of consumer prices, in August 2009 both monthly and annual inflation were running at a slightly positive 0.1%. 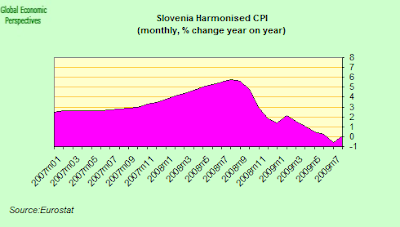 Given that the Slovenian economy is now almost entirely export dependent, such a deflationary process is inevitable (the so called eurozone "internal devaluation" mechanism) since if we look at the chart below we can see that Slovenia's Real Effective Exchange Rate with the benchmark country Germany has deteriorated sharply since 2004, indicating a significant loss of competitiveness which will now need to be clawed back. 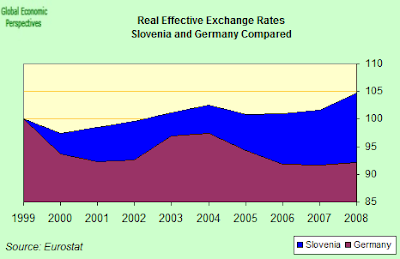 However, the correction won't be an easy one if we look at comparative levels of inflation using the EU HICP methodology, since in fact while German consumer prices fell year on year in July and August - by 0.7%. Slovenia's prices have risen faster than German ones all year and were still rising, if only marginally, in August, which means that Slovenia has still been losing competitiveness with Germany even as 2009 has progressed. 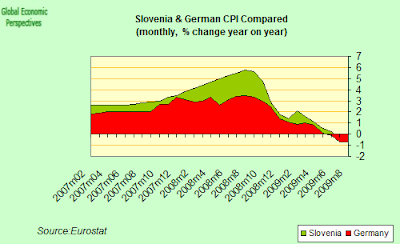 The government strategy is currently to support the economy with stimulus spending, and this together with a return in demand from western Europe will bring economic recovery next year after the country tumbled into what was the deepest contraction in the euro region in Q1, according to Finance Minister Franc Krizanic.

The government plan to spend about 15 percent of GDP this year in an attempt to growth, which is currently forecast to show a full-year contraction of 4 percent. To finance this spending the administration have announced the sale of about 4.5 billion euros in Eurobonds, which will include funding to back a 1.2 billion-euro guarantee to help exporters such as appliance maker Gorenje Group and car maker Renault's Slovenian unit.

Such stimulus measures will of course increase the Slovenian deficit, and will only be justified if it is used to support the economy while the much needed correction is carried out. That is to say, the measures will only be justified if the aid in the internal devaluation process, which will be the key to success or failure. Unfortunately, as I say, this process has yet to begin.