Eurozone manufacturing and services sectors continued to contract in April, but the rate of decline continued to slow, according to the latest flash readings from the monthly surveys of purchasing managers. The preliminary Markit euro-zone PMI rose to 40.5 from a reading of 38.3 in March, a six-month high. The April services PMI rose to 43.1 from 40.9 in March, exceeding forecasts for a reading of 41.2. April manufacturing PMI rose to 43.1 from 33.9 in March, while expectations were for a reading of 41.2. A figure of less than 50 means a majority of purchasing managers saw a drop in activity, while a reading of more than 50 signals expansion. 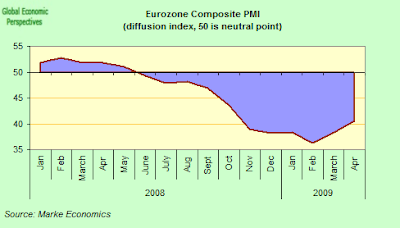 Activity in German manufacturers and service sector firms dropped for an eighth straight month in April, athough the pace of the downturn was the weakest since last November. The flash estimate of the Markit composite purchasing managers' index rose to 39.7 in April from 38.3 in March.

"There's been a slight improvement in Germany but it's still underperforming
compared to other euro zone members," said Chris Williamson, chief economist at
Markit.

Despite the fact that some recent short term indicators have suggested a slight easing in Germany's contraction, the economy is still expected to suffer an unprecedented contraction of five percent or more this year. The Mannheim-based ZEW institute reported this week that its monthly gauge of analyst sentiment rose to its highest level in nearly two years in April, and this has lead some economists to start predicting the German recession may end in the autumn. 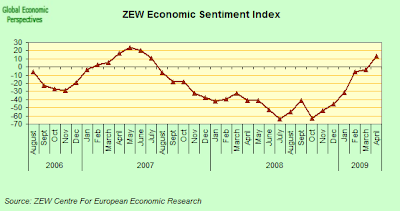 Finance Minister Peer Steinbrueck appears to be much more realistic, pointing out that the economy could shrink by more than five percent this year, with some observers even suggesting a seven percent contraction may not be out of the question. Speaking in Berlin earlier this week Steinbrück said the country’s dismal economic performance in the past six months had made “a five before the comma not unlikely”. When speaking of the recent "dismal economic performance" he was presumeably thinking about first quarter 2009 GDP data which is due for a preliminary release next Wednesday. While Steinbrück was saying the “downward dynamic is not letting up”, Karl-Theodor zu Guttenberg, Anrea Merkel's economics minister, was more equivocal: “while we may not reach the bottom this year, we may come to a point where we can see the bottom”, he said. It depends how dirty the water is at those depths, I suppose.

Manufacturing industry has been especially hard hit in Germany, and the latest PMI showed the sector was still well in negative territory. April's manufacturing index rose slightly to 35.0 from 32.4 in March. However, in a vague sign of some slight improvement the new orders index rose to its highest level since October, and was up at 36.4 from 28.9 in March. 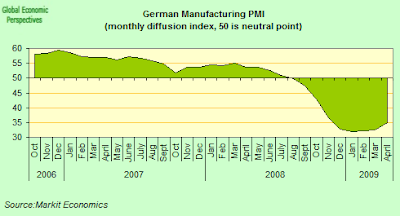 The composite PMI employment index fell to a new series record low of 40.8. The services sector index rose to 43.5 from 42.3, showing that, not surprisingly, most of the weight of the recession is currently being borne by the manufacturing sector.

"There's quite a long way to go yet before the labour market sees any stability. I think a protracted period of falling employment is on the cards," Markit Economics representative Chris Williamson said in his comments on the report. 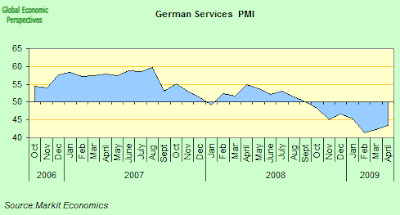 And a sombre note was also added by Germany's leading economic institutes who forecast this week that the economy would shrink 6 percent this year, offering us the perspective of what looks set to be the country's worst economic performance since World War II. The institutes also suggest the German economy will stay in recession until at least mid-2010. An anticipated 23 percent decline in exports this year will prevent recovery, pushing Germany’s jobless rate to an anticipated 10.8 percent next year and lifting the budget deficit to nearly twice the European Union limit, according to their half-yearly forecast. Indeed the institutes suggest German GDP, which grew by 1.3 percent last year, may need until 2013 to return to the 2008 level.


The pace of decline in French private sector activity also moderated further in April, and the flash estimate of the Markit/CDAF composite purchasing managers' index rose for the second straight month to 43.5 in April after hitting 41.4 in March. Again this was the highest level in six months. The PMI for the manufacturing sector jumped to 40.0 in April from 36.5 in March, while the headline measure for the services sector rose to 46.2 from a March reading of 43.6. 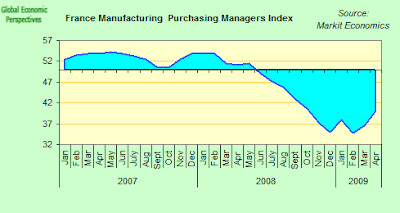 New orders or business continued to decline in both segments of the economy, but at a slower pace than in March, offering hope that demand may be starting to stabilise. The business expectations index in the services sector was also up, jumping to 59.1 from 51.9 in March. 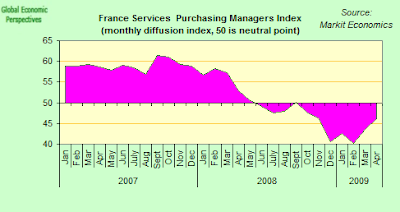 Some economists are now suggesting that the French downturn may have bottomed out in the first quarter of 2009, although the national statistice institute (INSEE) estimates GDP may have fallen by about 1.5 percent quarter on quarter, the sharpest contraction since 1975. So all of this is now a very hard question to call, although it may well be that France's contraction will moderate in the second and third quarters since the French economy is not export dependent and French consumers are not as heavily indebted as they are in some other Eurozone countries like Spain and Ireland.

That being said, Markit did sound a note of caution over April's PMI data, stressing that rising unemployment poses a substantial downside threat to any early recovery. April's composite employment index stood at 39.5 as the pace of job shedding in the private sector remained close to February's series record low of 39.2. "While the intensity of falls in activity and new business may have moderated, the danger now is of a protracted period of heavy job losses, which will drag on demand and enfeeble any recovery," according to the Markit statement.

However French manufacturers’ confidence did rise in April rose for the first time in 13 months, suggesting the easing in the slump in manufacturing may be having a positive effect on sentiment. The index, based on a sample of 4,000 manufacturers rose to 71, from 68 in March. The March reading had been the lowest since the series started in June 1962, so it would be very premature to start jumping to too many conclusions. 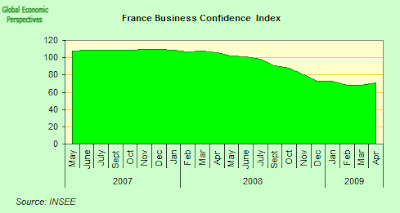 So all this needs to be kept very much in perspective. The Organization for Economic Cooperation and Development projects French unemployment to rise this year to almost 10 percent from 8.2 percent, while The International Monetary Fund estimate joblessness will reach 9.6 percent this year and that the French economy will contract by 3 percent.