Are Austria's Banks More At Risk Than Their Italian Counterparts?

“For Austria, the actual crisis is yet to come. The decline of the eastern European economy will hit Austria in 2009".
Peter Eigner, Professor of economic history at the University of Vienna”


The yield difference, or spread, between 10-year Austrian securities and benchmark German bunds has been rising substantially of late, and hit 137 points on Feb. 18, the widest yet recorded (see chart below). At the same time Austria now has a higher default risk than those Mediterranean "laggards" Italy, Portugal and Spain, at least according to credit-default swap prices as quoted by CMA Datavision. Austrian swaps were trading at 253.3 basis points on March 3, compared with 17.5 points 12 months ago. That means it costs 253,300 euros a year to protect 10 million euros from default for five years. 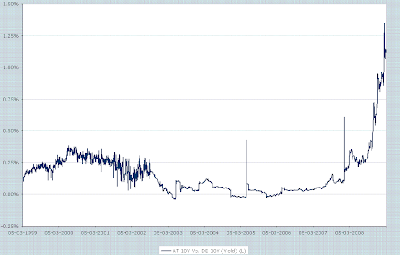 The reason for this sharp spike in spreads is, of course, the heavy exposure the Austrian banking system has to the risk of defaults in the East. Austria’s banks have about 201 billion euros ($254 billion) oustanding in loans in Eastern Europe, equal to about 71 percent of gross domestic product, according to data from the Bank for International Settlements. Shares of Austria’s Erste Group Bank, which made more than two-thirds of its profit from emerging European economies in 2008, and Raiffeisen International Bank-Holding AG, which operates only in the region, have both dropped more than 85 percent from their peaks.

To put this in perspective, Austria’s banks could withstand losses of up to 31 billion euros on their outstanding loans, according to stress testing carried out last month by Austria’s central bank. But what if the defualt figure rises beyond this?


Now all these numbers have been causing some controversy of late (see Izabella Kaminska's piece in FT Alphaville ) and Erik Berglof, Chief Economist at the European Bank for Regional Development has taken issue with some of those who have expressed concern about the situation, specifically referring to the widely quoted BIS figure of $1,700bn, (cited among others Morgan Stanley's Stephen Jen, Yours Truly here on Afoe, and The Anthropologist's Grandson Ambrose Evans Pritchard in the Daily Telegraph). In particular, Berglof asks the following question:

The $1,700bn, which is taken from Bank for International Settlements statistics, represents the total claims of foreign banks and their affiliates on eastern Europe. Western banks own some 80 per cent of the region’s banking sector. The BIS figure therefore simply reports the region’s bank balance sheets. At $18,000bn the equivalent figure for western Europe is more than 10 times higher — should we be concerned?

My answer is, yes, we should be concerned, and more importantly, Austria's citizen's should. Let's look at what Berglof says next:

A much better measure of refinancing need is short-term external debt owed by the region’s banking sectors to foreign creditors. According to central bank data, this is about $200bn for all of central and eastern europe.

Thinking about his argument, a lot of things make sense to me, in a sort of sudden flash of lightening. You see, we are talking about two different things here, one is the level of exposure to default on the loans, not sovereign default, but default by households and companies as the economies contract, and as the currencies slide (or, in the case of the Baltics and Bulgaria, internal deflation is carried out), and the other is the issue of speculative attacks on currencies and reserves due to the gap in the current account deficits. But this would be the point, we are not dealing here with a 1960s type balance of payments crisis (although you wouldn't know that from looking at the loan measures the EU has been taking, or from the language it is using which constantly refers to them as balance of payments loans).

What we actually have on our hands, however, is not a simple balance of payments crisis, but rather a regional deleveraging process, as economies which have expanded well beyond their short term capacity level of output now contract sharply, in many cases with a boom bust dynamic. This is inevitably going to produce a steady stream of defaults over the next two to three years. One extaimate has been in the (worst case scenario) context of Ukraine that defaults may rise as high as 60%, but lets just imagine they rise above 20% - that would be around a 40 billion bill for Austria, and a 350 billion euro bill for Western Banks in the Context of Eastern Europe as a whole. And if we get a worst case scenario of 40% default, then you just double those numbers.

Erste said that statistics from the Bank for International Settlements had been misinterpreted. The analysts cited the “alarming news” that eastern Europe has borrowed $1.7 trillion abroad and has to roll-over or repay $400 billion this year. They compared that with Germany’s foreign borrowings of $2.3 trillion, Britain’s figure of $4.5 trillion and Belgium’s need to repay or roll-over $375 billion this year.

The point about the UK is of course, very well made (although it doesn't make East Europe's position any better to know that things in the UK are bad), however Germany is a current account surplus country, so it is hard to see what exactly the relevance of the point they are making as regards Germany is. Unless, of course, they are suggesting that those banks who have leant to German customers are running a stronger default risk than those who have leant to Poland. They should, of course, have mentioned Spain or Greece, where the current account deficits have been massive, and foreign exposure is large, although since the risks of what has been happening in Spain and Greece are already well-known, it would hardly have helped their case. The difference is, of course, that Spain and Greece are in the Eurozone, which is where I am arguing the Eastern countries should now be, and I find it hard to see that these Erste analysts are even serving their own interests by serving up the kind of argument they have been serving up. What we need to see is stress testing on possible default rates for the Eastern loans, and on various scenarios, over the next 5 years.

They also add this which seems to me to be extraordinarily spurious:


Austrian banks have granted loans of $318 billion, or 73 percent of the Alpine nation’s gross domestic product to eastern Europe, the report said. They have also borrowed $143 billion, or 33 percent of GDP, from the region, it added. That makes the banks’ net debt equivalent to 40 percent of GDP.

I mean, are they suggesting that the default risk inside Austria is the same as the default risk externally, if they are this is the first time I have heard such a suggestion. The problem in Austria is not likely to be the debt which Austrians have to pay externally (all those strange Swiss Franc mortagages, which have to have been a mistake, but still), but the none repayment of debts elsewhere which result in a ballooning of Austrian government debt which currently equals 62.3 percent of its GDP. Also Austria has a current-account surplus of almost 9 billion euros.

Returning to the main theme, of course no one at this point has any accurate idea of the real level of default we are going to see in the East, or of the posterior recovery rate on the assets, but it doesn't help restore confidence if leading authorities essentially address the secondary issue and not the primary one. That presumeably is why Austrian spreads have risen and continue to rise. It is also why Eastern Europe needs a collective solution to its problems, and it needs one now.
Posted by Edward Hugh at 9:09 PM

EU: The EU does not give its citizens a voice. The Europe needs Initiative association recognizes this as a threat to the Union's future. “We Change Europe” are convinced that it is time to take initiative and to invigorate the concept of a European Citizens' Democracy.

“We Change Europe” wants to offer the opportunity of getting involved into the process of political decisions made in the EU. Therefore they created an E-Voting tool and the possibility to promote political aims in form of paneuropean initiatives. In order to foster such citizens' democracy they organize Europe-wide votes for important union-related decision. All Europeans are invited to participate in these initiatives.