The pace of the industrial contraction eased up a little in January, and manufacturing shrank at a slightly slower pace in January while factory prices tumbled at their fastest rate in at least six years, according to the latest report from Markit economics.

The survey of around 3,000 manufacturers showed only Germany among the euro zone's leading four economies registing a deeper contraction in January, while France, Italy, and Spain all saw some slowing in the pace of decline. The Markit Eurozone Manufacturing purchasing managers' index for January rose to 34.4 from 33.9 in December, the eighth month in a row the index has been below the 50.0 mark that separates growth from contraction.

"the situation clearly remains dire, with the data consistent with industrial
production falling at an annual rate of over 10 percent, which induced a record
rate of job losses as firms scaled back their operating
capacity," according to Chris Williamson, chief economist at Markit.

German manufacturing contracted at its fastest pace in over 12 years in January as further slumps in demand lead employers to cut staff at a record pace. The headline index in the Purchasing Managers' Index fell to 32.0 in January from 32.7 in December, bringing it further below the 50.0 mark separating contraction from expansion. 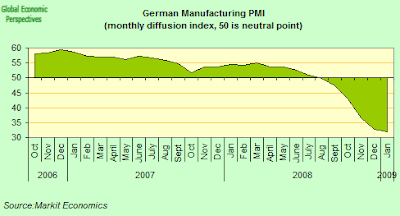 The reading, which showed the sector shrinking for the sixth month running, was the lowest since the series began in April 1996. A sub indicator tracking employment in the sector also fell to a new series low for a second month running.

While The Situation In France Improves 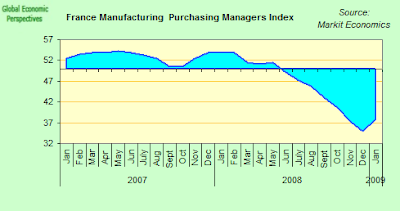 "It has rebounded slightly, so this is raising our hopes that December
represented a bottom of the rate of contraction for manufacturing in France,"
said Markit chief economist Chris Williamson. "Hopefully we won't see any
further worsening in the rate of contraction, but it's going to be a very
difficult year because employment tends to lag output," he said, adding that job
losses could weigh more heavily on consumption.

Job cuts persisted for the ninth successive month and were the sharpest since the survey began in April 1998 with the index falling to 35.8 from December's 37.9.

Conditions for Spanish manufacturing continued to deteriorate in January, although the pace of decline eased slightly from December's record low with the PMI rising in January to 31.5 from December's 28.5, a reading which had been the lowest level in the near 11-year history of the survey. 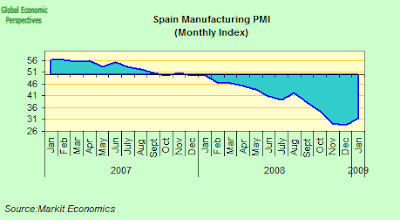 "January PMI data suggested that business conditions remained very challenging
for firms in the Spanish manufacturing sector," said Markit Economics economist
Andrew Harker. "Although many of the indices have risen from the record lows
seen at the end of 2008, it must be noted that the contractions in output, new
orders and employment continued to be severe in January,"

Export orders shrank sharply, although at a slightly less severe pace than in December, and Markit said some companies reported that exports to the UK were suffering because the euro's strength against sterling was eroding their competitiveness.

Italian manufacturers cut jobs at the fastest pace in at least 12 years in January as activity fell sharply for the 11th month running. The headline manufacturing Purchasing Managers Index edged up to 36.1 from 35.5 in December and November's series record low of 34.9, suggesting Italy's profound manufacturing recession may have hit its trough and be gradually bottoming out. 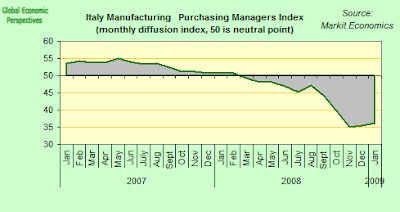 On the other hand staff were shed at the fastest rate on record in response to the recent steep falls in workloads, with the relevant sub-index declining for the fifth consecutive month.

The latest data offered no sign of any rebound but at least the survey's sub-indexes related to various aspects of activity posted fewer all-time lows than in the last couple of months. Output contracted at its second fastest pace on record and was only marginally above November's record low, while export orders declined at a somewhat weaker pace than December's series record.

Greece's manufacturing Purchasing Managers' Index fell again in January to a reading of 40, from 41 in December, a new record low for the third month in a row. The index shows that the Greek manufacturing sector has now fallen into a recession, with production, new orders, employment and inventories all falling significantly in the first month of 2009. Production and employment shrank at a record rate in January, reflecting a sharp decline in both domestic and foreign demand, according to the report.