Spain's Economy Peers Out Over The Precipice: The Abyss Lies Below


The condition of Spain's economy is deteriorating markedly and rapidly by the month. Output is down, domestic demand is down, exports are struggling, and unemployment is up. The tumultuous events of late August and early September in the global financial markets are now evidently making their presence steadily felt on the real economy. And since Spain's banking and financial crisis continues to trundle on, with no effective remedy whatsoever being offered, the worst is, most definitely, still to come. This is going to be a long hard road to travel for what was once the blue eyed boy among the eurozone economies.


Spain experienced another sharp decrease in industrial output in August (down 7.0% year on year). Month on month working day adjusted output plunged by 33.1% in August,
after a marked rebound in July (up by 6.1%), but this is not as dramtic as it seems since industrial production normally falls sharply in August due to annual holidays.


But the year-on-year number, the index fell by 7.0%, folowing a 3.0% drop in July (revised) and a 9.2% one in June (the sharpest fall since a 1993 recession) show that the contraction in Spanish industry is now sharp and severe. August was the fourth consecutive monthly drop, and April only gives the appearance of being positive due to the peculiar March Easter calendar impact which can be noted in even the seasonally adjusted data across the globe. 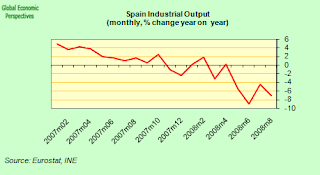 These results obviously suggest not only that the recession has already begun (contraction in Q3 2008) but that it is likely to be long and deep - more a slump than a recession. If we look at the output index level (which doesn't yet include the August drop since Spain do not publish an adjusted index, and Eurostat have yet to release the EU harmonised data) we can see (below) that output actually peaked in July 2007 (one month before the onset of the credit crunch) and since then has been falling. This trend can be expected to continue for some considerable time to come. 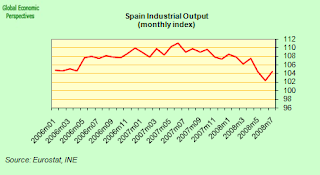 
Spain's manufacturing sector shrank at its fastest pace in at least 10 years in September as output, new orders and employment all fell at a record rate, the Markit Economics Purchasing Managers Index showed on Wednesday. This result is hardly surprising, since September seems to have been the ultimate "mensis horribilis" for industrial output internationally, with global manufacturing activity contracting for the fourth consecutive month, and output falling to its weakest level in over seven years according to the JP Morgan Global Manufacturing PMI, which at 44.2 hit its strongest rate of contraction since November 2001, down from 48.6 in August (Please see the end of this post for some information about countries included and the JP Morgan methodology).


According to the JP Morgan report the retrenchment of the manufacturing sector mainly reflected marked deteriorations in the trends for production, new orders and employment. The declines in output and new work received were the second most severe in the survey history, while staffing levels fell at the fastest pace for over six-and-a-half years. The Global Manufacturing Output Index registered 42.7 in September, well below the 48.5 posted for August.

The sharpest decline in production was recorded for Spain, followed by the US, Japan and then the UK. Although the Eurozone Output Index sank to its second-lowest reading in the survey history, it was above the global average for the first time in four months. Within the euro area, France and Spain saw output fall at survey record rates, while in Italy and Ireland the contractions were the second and third most marked in their respective series. Germany, which until recently was the main growth engine of the Eurozone, saw production fall for the second month running and to the greatest extent for six years. Manufacturing activity in Japan fell to the lowest in over 6- years with the Nomura/JMMA Japan Purchasing Managers Index declining to a seasonally adjusted 44.3 in September from 46.9 in August.

At 40.8 in September, the Global Manufacturing New Orders Index posted a reading well below the neutral 50.0 mark. JP Morgan noted that the trends in new work received were especially weak in Spain, the UK, France and the US, with the all bar the latter seeing new orders fall at a series record pace (for the US it was the strongest drop since January 2001). The downturn of the sector led to further job losses in September, with the rate of reduction in employment the fastest since February 2002. Conditions in the Spanish, the UK and the US manufacturing labour markets were especially weak.

So basically this is where we get to learn what a global credit crunch means in terms of output and economic growth. Unsurprisingly JP Morgan stress the strength of the slowdown in Spain a number of times.

In fact the Markit Purchasing Managers Index for Spain dropped to 38.3 points in September - the worst reading ever for any European Union country in the entire history of the survey (10 years). The reading was down from the 42.4 one in August. Remember these readings show the rates of month on month contraction. Thus the number may well rise back into the 40s in coming months, but this will still mean continuing contraction in the actual level of output. 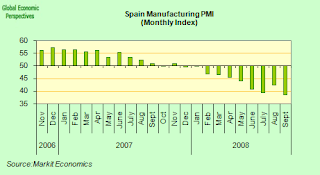 Slackening consumer demand - remember retail sales fell year on year by 7.5 percent in August - saw employers lay off workers at a record rate in September, and, of course, unemployment shot up. 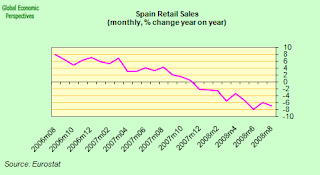 A quarter of survey respondents reported lower employment than in August, indicating that the euro zone's worst unemployment rate, 11 percent in July, is certainly destined to get worse. Factories said new business fell substantially and output panellists blamed Spain's sharp economic decline as the main cause of the fastest ever decline in output - the fourth month in the last five showing a record contraction.

The general deterioration of activity in the eurzone - which is now almost certainly in recession - was reflected in a record low reading for export orders.


Services Output Also Declines, But Not As Sharply As Manufacturing


Conditions in the Spanish service sector alos worsened considerably in September. There were substantial declines in activity, new business and employment. Spanish companies were generally highly pessimistic about their prospects over the next twelve months. The seasonally adjusted Markit Business Activity Index, registered 36.1 in September, down from 39.0 in August. 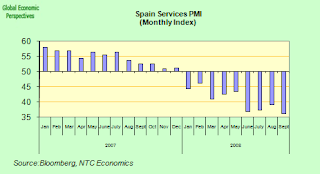 Moreover, the latest fall in activity was the sharpest since the survey was first introduced in August 1999.

Marked falls in activity were reported across all six broad sectors monitored by the survey. The declines were steepest in Transport and Storage and Financial Intermediation. New business contracted at a rate equal to June's series record as customers reduced their activity. The Post and Telecommunications and Transport and Storage areas reported particularly large falls.

As incoming demand weakened, businesses had more time available to concentrate on existing work. Outstanding business declined at the third-steepest pace in the history of the survey. The Other Services sector was the only monitored area to record an increase in work-in-hand.

In response to lower output requirements, businesses sharply reduced their employment in September. Moreover, the decline was the joint steepest since the series began. Job cuts were recorded in five of the six broad sectors, although Other Services saw employment increase strongly.

September price increases cut deep into Spanish service firms' ability to generate profits. Input costs continued to rise quickly, despite the rate of inflation easing for the second successive month. High raw material costs were mainly responsible for the increase. However, companies reported they found themselves increasingly unable to raise charges to customers in response. Furthermore, output prices fell markedly, and at the steepest rate in the history of the series. Weak demand made agreeing increases in output charges with clients difficult. Other Services was the only area able to raise their prices to customers over the month.

Spanish service providers were more pessimistic about the future in September than at any time in the history of the survey, and around one-third of respondents expected lower activity in twelve months' time, with Hotels and Restaurants particularly pessimistic. Reasons for the negative outlook included the ongoing economic slowdown and the asymmetry between input and output prices.


Spanish consumer confidence fell to its second-lowest ever reading of 49.5 points in September from 51.4 points in August, Spain's Official Credit Institute said on Thurday. The September result was above a record low of 46.3 reached in July. A reading of less than 100 indicates pessimism about the economy based on the index which began in September 2004. 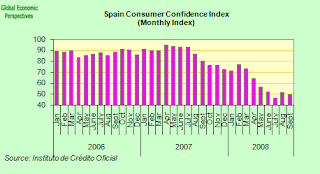 While we are still above July's all time low, and while some of the sub components on the index even perked up a bit in September it is worth remembering that these are small movements around what are, historically, very low levels. The outlook for domestic consumption three to six months from now does not look good. Not at all. 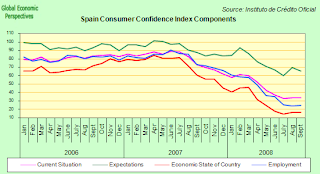 
The Global Report on Manufacturing is compiled by Markit Economics based on the results of surveys covering over 7,500 purchasing executives in 26 countries. Together these countries account for an estimated 83% of global manufacturing output. Questions are asked about real events and are not opinion based. Data are presented in the form of diffusion indices, where an index reading above 50.0 indicates an increase in the variable since the previous month and below 50.0 a decrease.

The countries included are listed below by size of global GDP share, and the figures in brackets are the % og global GDP in each case (World Bank Data).

Disclosure Statement: Edward Hugh is a macroeconomist who maintains a premier set of blogs at Global Economy Matters and is a featured analyst at Emerginvest. Edward Hugh provides non-partisan information about world stock markets, and does not have any holdings in foreign equities. The information stated above should not be construed as investment advice, and Edward Hugh is not liable for any actions taken on said materials.
Posted by Edward Hugh at 5:10 PM

A Spanish chap I know from Valencia says that there are now huge parking lots full of hundreds if not thousands of unsold cars that banks have had to repossess. There are Mercedes listing at 66,000€ now NOT selling at 12,000€. Thousands out of work.

We are on a helter skelter and I can't see the end.