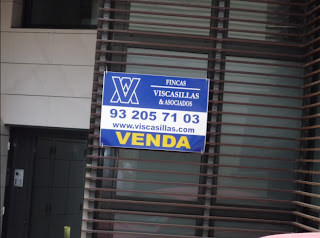 Well, it's been a quiet week, but bit by bit all the pieces are trickling into place. The latest little hiccup in the system comes from today's news that the cost of default protection on mortgage-backed securities sold by Caja Madrid - Spain's second-biggest savings bank - has soared to a record amid speculation the ongoing property crash may worsen. Credit-default swaps on a top ranking portion of Caja Madrid's Madrid RMBS III FTA transaction have jumped to 500 basis points from 310 at the end of July (RMBS's are Residential Mortgage Backed Securities), according to BNP Paribas prices. A rise indicates deterioration in the perception of credit quality; a decline signals the opposite.

The Madrid RMBS III FTA bonds are part of a 3 billion-euro transaction Caja Madrid sold in July 2007 - pooling mortgages with a loan-to-value ratio of an estimated 92 percent. The notes are among portions of debt from 13 separate transactions that Moody's Investors Service said last month it was reviewing for downgrade after a change in the way it assesses house price declines and risks of default for some Spanish mortgage bonds. Caja Madrid's loan default rate more than tripled to 1.89 percent of its total loans by the end of the second quarter from a year earlier.

Caja Madrid also had 262 million euros of mortgage-backed bonds downgraded by Fitch Ratings in June after the default rate on the underlying home loans doubled in a year. Caja Madrid also hit the headlines in July for its exposure to failed property developer Martinsa Fadesa. The bank's exposure to the firm - which is now in administration - was estimated to be1 billion euros, for which it had earmarked a provision of 250 million. Also we could note that Spain's national flagship airline Iberia had something of a shotgun wedding with the UK's British Airways last month, and Caja Madrid was the major sharholder with 22.9% of the equity. The Iberia decision was in marked contrast to the Italian government's support for the troubled carrier Al Italia, and there seem to be good reasons for assuming that the difference is not simply a question of the Spanish government having a greater disposition towards market-driven solutions.

Also last Thursday Gas Natural raised its potential stake in power generator Union Fenosa to over 50 percent after agreeing to buy a 5.15 percent stake from savings bank Caja de Ahorros Del Mediterraneo (CAM) The two entities have agreed to an equity swap through UBS in which Gas Natural agreed to pay CAM 18.33 euros a share, the same price it is paying hard-hit builder ACS for a 45.3 percent stake in Union Fenosa. CAM will receive an immediate 827 million euros (17.57 euros a share) and the remainder at the end of April, assuming the ACS-Fenosa deal goes through, raising the total to 862.8 million euros and CAM's capital gains to 556 million. This obviously provides Alicante-based CAM with much-needed liquidity as its traditional sources of funding steadily dry up in the wake of the developing housing crisis.

In order to do all this buying-up Gas Natural has itself had to float a 17 billion euro loan, a decision which has lead ratings agency Standard and Poor's say that it may in turn cut its credit ratings outlook on Gas Natural.

"It (the buyout) would result in a material weakening of Gas Natural's financial profile due to the size of the bid and the consolidation of Union Fenosa's approximate 6.9 billion euros of adjusted debt (at end-2007)," Standard and Poor's said.

So while this game may go round and round in circles, there are limits, and these limits are near to being reached. Somone somewhere is simply going to go one bridge too far with the implicit risk that this brings the whole edifice tumbling down like a pack of cards. And just one last "musical chairs" type detail. Guess which bank was on the list of guarantors for Gas Natural's 17 billion euro syndicated loan? You've got it: Caja Madrid.

Gas Natural announced on Thursday that it has mandated Barclays, BNP Paribas, Caja Madrid, Citigroup, ING, La Caixa, Royal Bank of Scotland, Santander, Societe Generale and UBS to lead the loan backing its purchase."The banks are committed to providing the financing for the whole transaction which will be around 17 billion euros," a company spokesman told Reuters Loan Pricing Corp.


According to Alessandro Leipold, acting director of the IMF's European Department, the Spanish government now has little room left to add fiscal stimulus to boost Spain's slowing economy - beyond that is standing back and allowing the economy to undergo its own natural correction process. Leipold also stressed in an inteview that to avoid a protracted economic slowdown, Spain should as a matter of urgency introduce reforms that would reallocate resources toward high-growth sectors. He also stressed the wage competitiveness issue given the need to start exporting more.

'Wage restraint will also be essential to protect employment and to prevent that higher inflation further damages external competitiveness,'

What Leipold is getting at is not that fiscal support is, in and of itself - undesireable, but rather there is not permanent room for 20 billion euro packages (around 2% of Spanish GDP) - like the one we saw last week - which mainly aim to prop up construction activity, and hope that at some early point everything will return to where it was. Leipold is simply making the point that what are called "automatic stabilisers" will naturally come into play as unemployment rises and tax returns fall, so the deficit will rise of its own accord. At the end of the first half of 2008 we were already running at a 1% annual deficit rate (from a 1% surplus rate a year earlier), so by this time next year Spain will be up against the EU 3% deficit limit without any additional packages being introduced.

Now the point is not that Spain should, at the end of the day be hamstrung by the 3% deficit limit - clearly the position is far more serious than that. But to be able to go beyond the 3% the Spanish government will need first to reconise the gravity of the situation, and then in the second place start to accept that it cannot possibly handle the financial implications of all that is happening hitting the banking sector alone. Brussels will need to be involved (as I am arguing, and as Wolfgang Munchau also argues - and please note that the latest flurry of activity on the FannyMae FreddyMac front on the US is precisely to do with specualtion that it is the US Treasury, not the Federal Reserve, which will have to step up to the plate and inject the cash which will save the failing mortgage providers. See this reuters report today for what ex-IMF chief economist Ken Rogoff thinks about the US outlook).


Of course in all this siren voices do abound. Ambrose Evans Pritchard quotes Bernard Connolly, global strategist at Banque AIG, who apparently said:

the eurozone faces possible disintegration unless there is a fiscal bail-out from Germany that matches - in sheer scale - Berlin's Versailles reparations payments after the First World War. "The bursting of the EMU credit bubble seems imminent, and will reveal current account imbalances among euro area countries as extremely dangerous. The medium-term feasibility of the euro area in its current form must be open to very considerable doubt,''

The comparison with Versailles may seem rather emotive, but we are talking about what are potentially very large amounts of money indeed here (between 300 and 500 billion euros, on my estimation, or between 30% and 50% of Spain's annual GDP). In fact the EMU's credit bubble has already burst on its Southern perimiter (Spain and Greece) even if we still can't see the full extent of the damage, and yes, EMU is not in danger at this point, but continued fudging and failure to act could well mean that it may be in the future.


Talking of fudging, Spain's economy Minister Pedro Solbes told the Spanish news agancy EFE over the weekend that Spain's unemployment could end the year above the government's 10.4 percent forecast (how much above he discretely failed to mention - and not unnaturally he was already warning of widespread government budget cuts next year. Solbes told news agency EFE in the interview that, "at the end of the year we could be above that (10.4 percent forecast)". Unemployment in Spain hit a 10-year high of 2.43 million people in July, with nearly two of every three layoffs coming from the construction sector.


It is also important to remember that even Solbes's negative budget forecasts are still based on his belief that quarterly growth from July to September will be "somewhat better" than in the second quarter when quarter-on-quarter growth slowed to 0.1 percent.


This is extremely unrealistic in my view. Solbes argues that Spanish GDP will benefit from lower oil prices (and declining domestic consumption which will ironically give a boost to GDP via an improved net export position), a good harvest and tax credits including the return of 400 euros to all income tax payers. I have discussed the oil price situation in my analysis of the May balance of payments data, but in the short term the Spanish GDP will get some statistical uptick from changes in the trade dynamic (although since this implies reduced consumption of imports, Spanish consumers will hardly feel this to be a benefit), but I think the sharpness of the downturn will mean we will soon see GDP growth in negative territory, and, of course, as an when oil prices start to pick up again this positive effect will turn into a negative one.

Metrovacesa SA have decided to sell more assets than planned after the Spanish company's real estate holdings lost value, according to El Economista yesterday, citing a company report. Metrovacesa now plans to divest offices, hotels and shopping malls valued at 1.53 billion euros ($2.3 billion), the newspaper said. The company previously aimed to sell assets worth about 303 million euros. The Spanish press has also been reporting that Metrovacesa’s sales rate has fallen from 8 properties per working day last year, to just one a day now. Metrovacesa’s income has collapsed 76% as a consequence, to 45.4 million Euros. Metrovacesa is one of the biggest residential property developers in Spain, and is listed on the Madrid stock exchange.

And even those properties the developers manage to get an initial sale on don't always work out as planned. El Pais reported yesterday that the number of buyers backing out of purchases on new developments - and losing their deposits in the process - is starting to create a new headache for developers: with up to 15% of sales unravelling according to experts.

The problem of buyers backing out after signing a private-sale contract and paying a deposit is illustrated by the latest half-year results published by Acciona, a large listed Spanish developer. Acciona booked more deposits – 16 million Euros – in the first quarter of the year than it did in the first half of the year, which it closed with deposits of just 13 million Euros. The reason being that many of the sales made in the first quarter of the year subsequently unravelled, with Acciona having to return deposits.

Oh, and just to sum it all up for today, Spanish builder Acciona SA have agreed to sell a 75 percent stake in its funeral-service company, Memora Inversiones Funerarias SL, to 3i Group Plc in a transaction that values the company at 330 million euros ($486 million) including debt. Acciona shares fell 30 cents, or 0.2 percent, to 135.35 euros on the news. Obviously they feel they won't be needing Memora's services, since they can obviously get buried in their own rubble - and at a far lower cost.
Posted by Edward Hugh at 10:11 AM