German industrial output continued increased in September, although the pace of increase is definitely slowing.

Production rose a seasonally adjusted 0.3 percent from August, when it advanced 1.9 percent, according to data released by the Economy and Technology Ministry in Berlin yesterday. From a year earlier, output rose 6 percent when adjusted for the number of working days.

Growth in emerging markets such as Russia and Eastern Europe is helping offset the impact of the euro's appreciation on exports, encouraging companies to expand. Still, record oil prices may curb economic growth as they erode spending power among Germany's customers, and stagnant internal demand may also take a toll. In one indication of this new factory orders dropped 2.5 percent in September from August, according to the Economy Ministry in an earlier release. 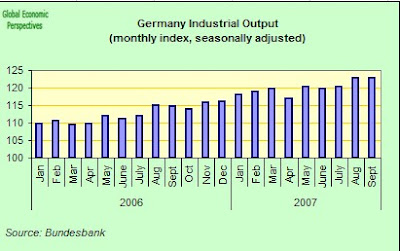