Well this certainly is a moment with possible interpretations to suit all tastes. The German IFO just came in with a monthly upward rebound. True the bounce was marginal, up to 140.2 from last months 139.9, but still, up is up. So what do you make of that? Well, if we actually look at the chart we can see the numbers are in fact still well down on the autumn 2006 and spring 2007 readings, which more or less fits in with the general picture we are getting. 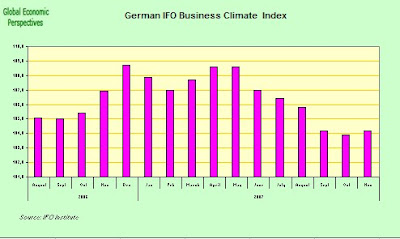 Interestingly if we turn to an examination of the sub-components in the index we find that the assessment of current conditions rose to 110.4 from 109.6 in October, while the indicator of expectations slipped to 98.3 from 98.6. German manufacturing is undoubtedly getting a good push from the favourable climate for exports (despite the rapidly rising euro), and especially in Eastern Europe where many of the currencies are directly or indirectly pegged to the euro. This impression is confirmed if we look at the readings for trade and industry, which rose from 7 to 7.6, and for manufacturing, which rose from 17.8 to 19.3 and compare these with construction, which fell to minus 21.3 from minus 20.6 and retail, which fell from minus 6.8 to minus 9.2.

As Claus Vistesen said in his revue of Q3 Eurozone GDP performance:

On the face of it the Q3 GDP release from the Eurozone seems to point to a rebound but we should not be fooled. I know that I tend to be a bit of a party pooper sometimes when it comes to the Eurozone but this time around you need to consider I think that the collective mass of almost all respectable analysts and economic commentators seem to agree with my general forecast. As such, all of us Eurozone watchers had pretty much agreed that Q3 all things equal would show a rebound relative to Q2 but given the monthly real economic data and confidence readings which have been rolling in it would also prove to be short-lived.

I think this is it. Steady as she goes, but the nose of the ship is now pointing downwards.
Posted by Edward Hugh at 11:10 AM