German consumer confidence fell to the its lowest level in almost two years according to GfK AG's index for December, which is based on a survey of about 2,000 people. The index fell to 4.3 from a revised 4.8 in November, the market- research company said in Nuremberg today. That's the lowest reading since January 2006. 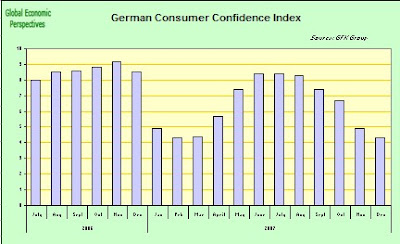 Well-known economic risk factors, such as the strong euro, turbulences on the international financial markets and high food and energy prices continue to impact on the generally good German economy. A "sense of impending inflation” is currently influencing German consumers and the positive factors which are currently evident, such as the sustained improvement on the job market and rising incomes seem unable to prevent the evaporation of optimism where propensity to buy and economic expectations are concerned. Conversely, income expectations have stabilized at a slightly higher rate in November.

In fact, the rise in income expectations is pretty marginal - from minus 0.7 to zero - and the sub indexes are in non too spectacular shape generally. 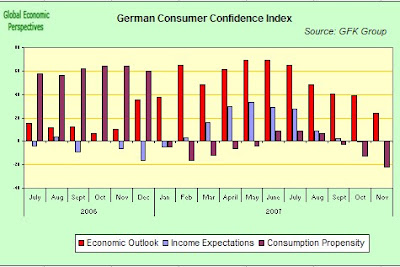 What we can say is that the income expectations are now pretty flat, that the expectation about the economic outlook has been steadily deteriorating since June, while the propensity to consume took a nose-dive after December 2006 (isn't that strange, just after the 3% VAT hike that everyone said wouldn't matter) and hasn't budged, except slightly downwards. What this seems to indicate is that German consumers are now preparing for a hard winter (a hard and more elderly one) and, like their Italian counterparts, are busy thinking about saving. Maybe this helps put yesterday's IFO reading in a bit more perspective. I think the IFO was more about current conditions (and how they have mildly surprised on the upside) than about anticipated future ones.
Posted by Edward Hugh at 2:00 PM