Slovenia's Economy Falls Off The Roof, While Slovakia Slides Into Recession

"Most other countries in the region are faring much better, though....Like Slovenia, which joined two years ago, Slovakia can enjoy the full protection of rich Europe’s currency union, rather than just the indirect benefit of being due to join it some day."
The Economist

“Saying that the situation is the same for all central and eastern European states, I don’t see that……you cannot compare the dire situation in Hungary with that of other countries.”
Angela Merkel

“Happy families are all alike; every unhappy family is unhappy in its own way”
Tolstoy

Slovenia’s economy contracted for the first time in more than 15 years in the fourth quarter of 2008, and is almost certainly heading for quite a deep recession as a construction boom came to an end while demand dropped for exports to other economies in the European Union. Gross domestic product shrank 0.8 percent year on year following a revised 3.9 percent expansion in the previous quarter. More astonishingly, quarter on quarter GDP contracted a seasonally adjusted 4.1 percent. Only Estonia and Latvia contracted at a faster rate. 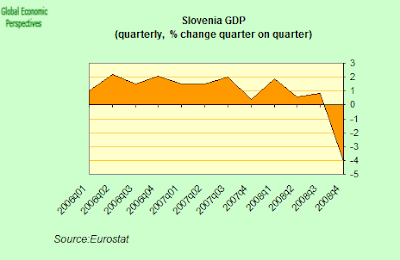 Goods exports were down by 9.4 percent, while goods imports fell by 7.3 percent. The positive growth services exports meant that total exports decreased less than total imports, and consequently the external trade balance contributed positively to the GDP growth (0.6 percentage points).

Gross fixed capital formation decreased sharply year on year (by 5.3 percent), having grown by 16,9 percent in the first quarter of 2008, and the fall back was undoubtedly the main factor behind the shock shrinkage. Negative growth was recorded in both construction investment (-5.5 percent) and in machinery and equipment (-6.1 percent).

“Slovenia can’t escape the sharp downturn in western Europe, and Germany in particular, so recession now seems inevitable,” according to Neil Shearing, an emerging markets economist at Capital Economics in London.

Obviously the economic performance of Slovenia - the first new EU member to adopt the euro in 2007 - will be closely watched during this recession, to see how euro membership actually affects performance. The Slovenian government forecast GDP growth to contract at 2 percent in 2009, but since this slowdown has come on so rapidly, it is hard to say much with certainty at this point.

Slovenia’s economy expanded in 2007 at the fastest pace since the country gained independence in 1991, with GDP increasing by 6.8 percent, driven largely by construction activity and investment.

The economy was maintained largely by a sharp acceleration in government spending which was up 5 percent year on year in the last quarter.

This problem seems to be an accelerated pass through of the financial crisis into other sectors of the economy with the biggest impact being felt in exports and construction investments. The Slovenian government have introduced a 12 billion-euro bank guarantee plan (amounting to nearly one third of the country's 35 billion euro GDP), together with subsidies for shorter work time and the sale of government bonds in an attempt to restart bank lending.

Industrial output and exports seem both to be very badly affected, and according to seasonally adjusted data industrial production last December was down by 4.1% over November, while year on year it decreased by 22.1%. Manufacturing output was down by 4.2% on the month and 22.2% year on year. 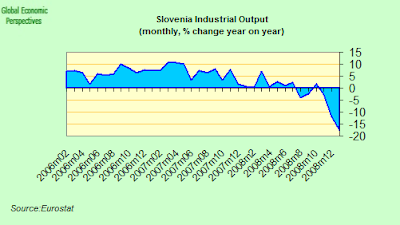 Construction activity has been very badly hit, and in January 2009 fell by 20.7% on the year. New buildings decreased by 29.8% while civil engineering only fell by 10.2%, reflecting the impact of government counter cyclical spending. 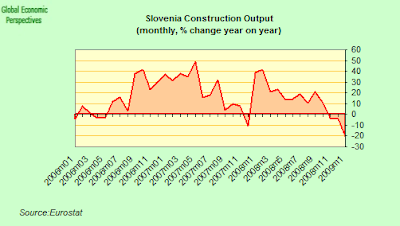 Slovenia had an estimated fiscal deficit of 1% of GDP in 2008, but the EU Commission now forecasts this will reach 3.2% in 2009, and if the economy contracts more sharply than expected (the Commission is expecting positive growth of 0.6%) this may well be somewhat larger.

The Slovak economy slowed further in the fourth quarter of last year with real GDP growing by 2.5 percent year on year. Whole year GDP for 2008 was 6.4 percent with total GDP reaching €67.33 billion. Economic growth had been 6.6 percent in the third quarter, and while there is no official data for seasonally adjusted quarter on quarter growth, I estimate the economy may well have contracted by around 1.5%. 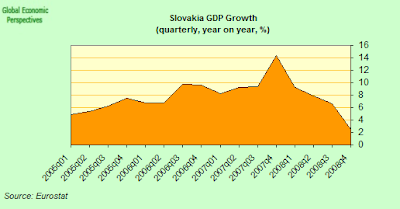 Part of the problem is the drop in export demand for Slovakia's car driven economy, and the country posted a trade deficit in January, as drop in demand was made worse by the suspension of gas deliveries from Russia. Exports slumped 29.9 percent on the year in January, the fourth consecutive monthly decline, and the biggest drop at least since 2006 when the statistics office began compiling data under the current methodology. Imports were down 22.4 percent. 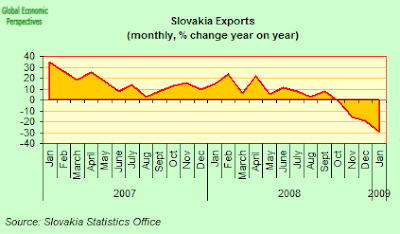 The drop in the demand for exports has obviously hit industrial production which decreased by 27 % year-on-year in January reach the biggest drop since the statistics office began compiling data in 1999. Manufacturing output fell 32,7 %. 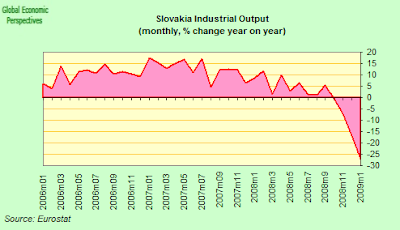 The fall in the trade gap obviously works against the current account balance, and Slovakia’s 2008 current-account deficit widened 29 percent over 2007. The 2008 gap represents 6.3 percent of preliminary gross domestic product, up from 5.3 percent of GDP a year ago. Not Spain or Greece territory yet, but certainly not a positive development given what we know about the effect of eurozone membership on some economies. 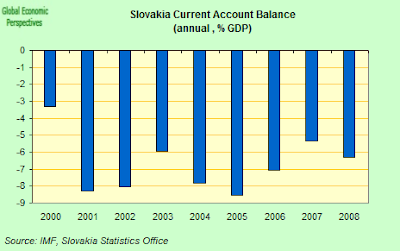 Slovakia’s government has cut its forecast for economic growth in 2009 to 2.4 percent from 4.6 percent, but this seems very optimistic indeed, and I think it will be hard for the economy not to contract.

The slowdown in growth may cut budget revenue this year by about 330 million euros, or 0.5 percent of gross domestic product, According to Finance Minister Pociatek said citing preliminary estimates. The finance minister doesn't expect the deficit for this year to breach the European Union’s budget-deficit limit of 3 percent of GDP, since the original target for the shortfall of 2.1 percent of GDP. However, if the economy should contract, then of course this limit will be in danger.

In July 2008 Moody’s gave Slovakia an A1 rating with a positive outlook, while in November S&P raised the long-term foreign currency rating to A+ from A with a stable outlook. Slovakia thus became the highest rated Central European country. The cost of protecting Slovak government debt against default rose to a record high in mid February, according to monitor CMA DataVision, with Slovakia's 5-year CDS hitting 237.5 bps.


This means it would cost 63,900 euros to protect 10 million euros worth of German government bonds and 308,200 euros to protect 10 million euros of Irish government bonds. To get some comparative idea of what this means there is currently a Cumulative Probability of Default (CPD) of around 5.3 percent on German debt, 22.8 percent on Ireland; 10.7 percent on Belgium, while Slovakia curently has an 18.7 percent CPD. In the short term this doesn't mean that much, since the country only had 28.6% gross debt in 2008, but it is the mid and longer term dynamic we need to think about. We have already seen the example of Ireland, Greece, Portugal and Spain, and should know that simply becoming a member of the eurozone is not a guarantee of anything in economic performance terms (although it does provide almost automatic protection from short term balance of payments crises), so it will now be interesting to watch whether the future evolution of these two newer members goes down the same road, or whether any lessons have been learnt from the earlier experience.
Posted by Edward Hugh at 3:22 PM