Europe's manufacturing and service industries contracted in September at the fastest pace in nearly seven years as continuing problems in credit-markets slowed lending and borrowing and companies scaled back production in response to slowing orders. The Royal Bank of Scotland Group composite purchasing managers index dropped to 47 - down from 48.2 in August - and the lowest since November 2001.

While these are only initial flash estimates, and we will need to wait to see the detailed confirmation on October 1st, this extended contraction in both manufacturing and services industries does suggest that it is now touch-and-go whether the eurozone economy will contract for a second consecutive quarter in Q3 2008, making for the first collective recession since the single currency was introduced.

In German private sector activity contracted at its fastest pace in over five years, as both the services and the manufacturing sectors reported shrinking output.

According data from economic research group Markit Economics, the flash estimate of the composite Purchasing Managers Index for Germany fell to 48.6 in September from 50.5 in August - the lowest reading since July 2003.

Germany's manufacturing sector contracted for a second straight month, falling to 48.1 in September from 49.7 in August - the weakest performance for the sector since July 2003. Most noteworthy was the fact that the volume of new export orders was particularly weak, dropping to the lowest level for eight years. This seems to indicate that we can expect the sector to weaken further in the months to come. 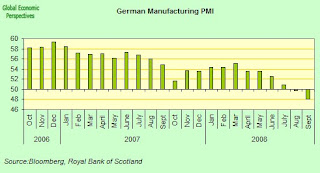 According to Markit Economics economist Tim Moore "New export orders, the erstwhile bastion of strength in the manufacturing sector, declined at the steepest rate since November 2001".

The services sector PMI dropped to 49.3 from 51.4 in August, the fist contraction since January. 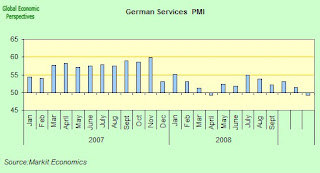 
The French manufacturing PMI continued to indicate contraction in September, with the reading falling to 43.6, a much sharper rate of decline than the 45.8 registerd in August. This is the fastest pace of decline in manufacturing production since October 2001, with output being dragged down by very weak domestic demand, which prompted a huge decline in new orders, according to the statement by Markit Economics. 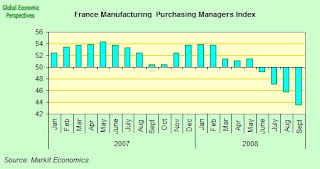 The service sector, on the other hand, showed unexpected strength, rising to 50.4 in September from 48.0 in August. 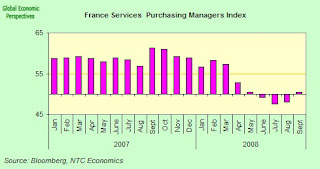